This colourful route through the Wheatbelt and Great Southern following the Public Silo Trail, which has transformed by a string of massive grain silos into works of art.

We recommend spending at least 5 days completing this adventure. There are powered and unpowered sites near all silo locations as well as ablution facilities.

What better way to get off the beaten track and explore the Wheatbelt than following these larger than life murals? The open-air gallery stretches from Northam to Albany.

You’ll wind your way through gorgeous Wheatbelt country towns like Merredin, rich with bright-yellow canola fields and wildflowers in spring.  There are heaps of picnic spots and nature walks around this area, as well as Aboriginal tours.

Each leg of this adventure discovers a new silo mural, some are closer than others allowing for more than one leg to be completed in a day.

Start your adventure from Perth travelling towards Northam and turning off on Northam-Toodyay Road for the first stop and Australia’s first ever painted silo mural.

*Please note CBH Northam Grain Termial is a fully operational grain handling site, with trucks and loading equipment constantly in use. The site is not open to the public. A safe viewing area on Toodyay Road does not currently exist, however plans are in motion to establish one in the near future.

Stay at Homestead, Valley, Drummonds or Bald Hill campsites for forest camping in the Perth Hills in your 4WD and Roof Top Tent.

Stay at Merredin Tourist Park for camping or fully equipped chalets and villas.

This stop showcases a series of Western Power owned transformer boxes. The various artworks can be found off Clive and Austral Terrace.

The silos at Pingrup took the artist 15 days and 230 litres of paint to create the mural depicting the scenes of everyday life in Pingrup’s farming community.

Artwork by Evoca1, whose name refers to the Spanish word evocar (meaning to evoke).

From Pingrup head along Katanning-Nyabing Road to view this mural and continue on Newdegate-Ravensthorpe Road to explore Lake King or back track to Lake Grace.

Stay at Newdegate Caravan Park or Hollands Track B&B with your 4WD.

Stay at a variety of coastal sites on secluded beaches of Hopetoun within the Fitzgerald River National Park.

Artwork by Yok (Australia) and Sheryo (Singapore) in 2018.

Mount Augustus is the world’s biggest rock, at 1700 million years old, it is three times older than Uluru and twice it’s size!

En route to the Everlastings Trail 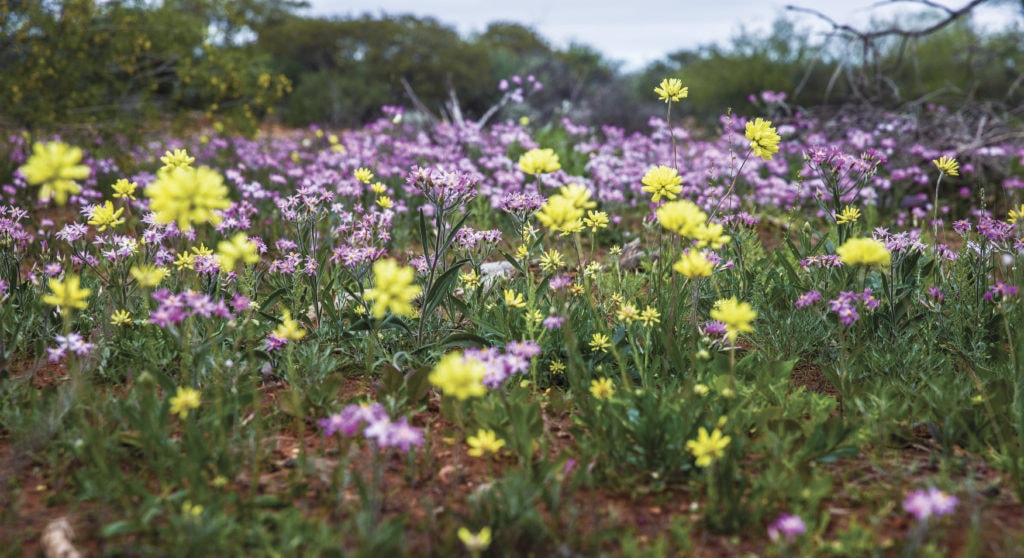 Our recommendations for your wildflower tour with a 4WD hire:

Why not start with Perth’s wildflowers? Kings Park is located right in the Perth CBD and covers more than 400 hectares of natural bushland. Over 1,700 native wildflower species can be seen there. With amazing views over the Swan River, this place should be on everyone’s bucket list!

Yanchep is a very popular spot, only one hour away from Perth. The park offers wildflowers and wildlife in abundance. Explore one of the nine walk trails, go birdwatching, discover one of the park’s caves and meet some koalas!

This park with its 27,000 hectares ranks as one of the important reserves for flora and conservation in Western Australia. There are many beautiful orchids and kangaroo paws which can be seen along one of the many walk trails available in the park. Entry is from Cockleshell Gully Road which is unsealed.

This reserve display colourful wildflowers in spring. Take your wildflower guide with you and go for a wander!

This park comes alive with its cover of Everlasting wildflowers after good rains. Coalseam Conservation Park should not be missed if you also have an interest for geology. A lot of fossils can be seen embedded in the riverbanks.

The Chapman River Regional Park is a must do with wildflowers that do not grow anywhere else. There are also over 120 bird species and 22 reptile species. See if you can spot kangaroos or echidnas during your trip! After your visit to Chapman River Regional Park, why not head out to Mullewa for a wildflower walk?
Mills Point Lookout also offers amazing views across the Chapman Valley and a huge abundance of wildflowers can be seen there as well.

Every year the town of Bindoon hosts its wildflower festival with a huge display of wildflowers at the town hall. There is a great range of local products for sale and a large exhibition of a vintage car on the oval. The rare and endangered Sun Star Orchid can also be spotted at the festival. On your way back from Bindoon, do not miss the beautiful Blackboy Ridge trail located on Chittering Road. This 1.5km trail, abundant in wildflowers, will take you to a lookout with amazing views across the valley.

Get A Quote  Our Locations